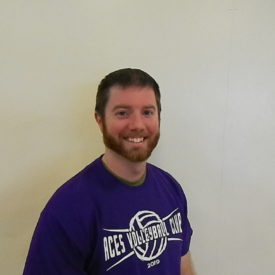 Timothy Cummins
This is Tim’s 9th season coaching for the Aces. Tim began his passion with volleyball at Fort Zumwalt South High school where he played setter and defensive specialist for three years. He also played libero for St. Charles United VBC for a year. He has been playing for a total of 14 years with experience in indoor and sand leagues. In the off season, Tim enjoys playing in a sand league with fellow Aces coaches. Tim recently married one of the original players for the Aces Volleyball Club, Brittany Maass.