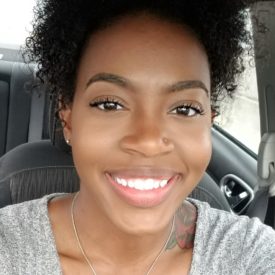 Shamekia McDowell is a motivated and passionate coach, who is dedicated to her players and the learning process. The love she has for volleyball is shown in her playing record and is something she wants to pass on to her players.
Shamekia began her volleyball career her sophomore year at Jennings High School. She went on to played for the North County Aces 17’s Club Team in her junior year. She went on the fall of 2008, to make 1st Team All-Conference and 2nd All-Districts. In her senior year, McDowell was voted team co-captain and named Co-Player of the year in the conference. Shamekia earned five varsity letters during her duration of high school sports from both volleyball and soccer.
In 2010, McDowell began her collegiate volleyball career at Kentucky State University majoring in Accounting. She then transferred to Robert Morris University- Peoria, where she continued her volleyball career; leading the team in blocks and kills.
After her collegiate student-athlete career, she went on to coach as an assistant volleyball coach at Harris-Stowe State University. This will be her first year coaching club ball and is happy to be back with the Aces